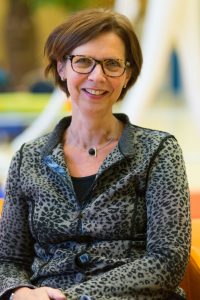 At not even 29 years old Truus had to deal with acute Non Hodgkin. Her daughter was just 1 year old when Truus had to fight for her life. After various chemo treatments and radiation, she recovered. Finally she had time to enjoy motherhood. Her son was born six years later. Everything seemed to be running smoothly, but Truus had to change her life at an early age. Due to the Non Hodgkins, Truus had to choose to make a career switch.

“I come home very tired after a day of work. Even cooking is no longer possible, as this costs too much energy. ”

At the time, she consciously had to ignore her teaching of Biology because the radiation had such a profound effect on her speech. Truus then chose to do a secretarial training and eventually started working as a research assistant in the cardiology department.

Fate would strike again at the age of 48. Truus discovered a nodule on her own and went to her GP. The doctor immediately referred her to the hospital, where her suspicion was immediately confirmed. Truus had breast cancer. She remains undaunted and will fight the breast cancer.

All this time Truus has worked in the Cardiology department and now also works as an advisor. A place where she has a great time.

After 10 years Truus found out that the vessels have been damaged by the chemo and radiation. The first symptoms are chest pains and being very tired. Truus: “After a day of work I come home very tired. Even cooking will no longer work, this costs too much energy. “

“I found it difficult to report that pain to the doctors. The pain is not visible; you can only convey it verbally. And the complaints could not be traced. “But after a period of research, a treatment has been set up with the doctors and I can say that it is going better. I am now well helped with my complaints. And have learned to live with the fact that my energy is no longer as it was before.”